Martha My Dear, a song on the English rock band's only double album The Beatles (aka the White Album), was named after Paul McCartney's beloved sheepdog.

In 1966, Paul McCartney, who grew up without a dog, decided it was time to have one for his new home in London. He chose an Old English sheepdog, named her Martha, and the two quickly developed a strong bond. Paul recalls, "She was a dear pet of mine. I remember John being amazed to see me being so loving to an animal. He said, 'I've never seen you like that before.' I've since thought, you know, he wouldn't have. It's only when you're cuddling around with a dog that you're in that mode, and she was a very cuddly dog."

In 1968, Paul wrote Martha My Dear, and many assumed it was about a woman. However, according to Paul, he made the lyrics general enough so they could be heard as a message to a woman or dog. "It's a communication of some sort of affection, but in a slightly abstract way. 'You silly girl, look what you've done,' all that sort of stuff. These songs grow. Whereas it would appear to anybody else to be a song to a girl called Martha, it’s actually a dog, and our relationship was platonic, believe me."

Hold your head up, you silly girl
Look what you've done
When you find yourself in the thick of it
Help yourself to a bit of what is all around you
Silly girl

Hold your hand out, you silly girl
See what you've done
When you find yourself in the thick of it
Help yourself to a bit of what is all around you
Silly girl

The Dog on the Tuckerbox

The Dog on the Tuckerbox is an Australian monument dedicated to the pioneers of Gundagai.

According to the Commemorative Plaque, "The Dog on the Tuckerbox memorial is supposedly based on an incident that occurred to a teamster named Bill the Bullocky on the road to Gundagai in the 1850s. While leading his bullock team and wagon across a creek five or nine miles from Gundagai, Bill's wagon became hopelessly bogged in the creek. Trying to drag the wagon out of the bog, one of his bullocks then broke the wagon's yoke. Thereupon, Bill gave up the job and went to have his lunch. But here, to top off his run of bad luck, he found his dog sitting - or worse - on his tuckerbox. The other bullockies thought the incident a great joke and one of them supposedly wrote a poem about it. In several versions, the poem spread the story of Bill's bad luck far and wide."

The original poem was considered inappropriate (the dog spoiling the food inside the tuckerbox).

Good morning mate, you are too late,
The shearing is all over,
Tie up your dog behind the log
Come in and have some dover.
For Nobby Jack has broke the yoke,
Poked out the leader’s eye
and the dog shat in the tuckerbox,
Five miles from Gundagai.

The complete poem was not found till years later when someone was able to piece it together. According to Internet Archive, the 'original' (below) "was printed at the Gundagai Times and would have been little different to that which was penned more than seventy five years before. - the author was Anonymous, but another reference I found accredited these words to a 'Bowyang Yorke' in 1850. - [the words beggar and bloody] were omitted from the booklet."

As I was coming down Conroy's Gap
I heard a maiden cry,
"There goes Bill the Bullocky,
He's bound for Gundagai.
A better poor old beggar
Never earnt an honest crust,
A better poor old beggar
Never drug a whip through dust."
His team got bogged at the Five Mile Creek,
Bill lashed and swore and cried,
"If Nobby don't get me out of this,
I'll tattoo his bloody hide."
But Nobby strained and broke the yoke,
And poked out the leader's eye,
Then the dog sat on the Tuckerbox
Five miles from Gundagai.

In the 1920s, a cleaned-up version of the poem titled Nine Miles from Gundagai (it is unsure why it was named this) was written by Jack Moses, a salesman and balladeer. This poem became very popular and was the inspiration of the monument.

I've done my share of shearing sheep,
Of droving and all that,
And bogged a bullock-team as well,
On a Murrumbidgee flat.

I've seen the bullock stretch and strain,
And blink his bleary eye,
And the dog sit on the tuckerbox,
Nine miles from Gundagai.

I've been jilted, jarred, and cross in love,
And sand-bagged in the dark,
Till if a mountain fell on me
I'd treat it as a lark.

It's when you've got your bullocks bogged
That's the time you flog and cry,
And the dog sits on the tuckerbox,
Nine miles from Gundagai.

We've all got our little troubles,
In life's hard, thorny way.
Some strike them in a motor car
And others in a dray.

But when your dog and bullocks strike,
It ain't no apple pie,
And the dog sat on the tuckerbox
Nine miles from Gundagai.

But that's all past and dead and gone,
And I've sold the team for meat,
And perhaps, some day where I was bogged,
There'll be an asphalt street,

The dog, ah! well he got a bait,
And thought he'd like to die,
So I buried him in the tuckerbox,
Nine miles from Gundagai.

The first monument was erected in 1926, nine miles from Gundagai. This was replaced in 1932 by the present statue that stands today, five miles north of Gundagai.

A nationwide competition was held to obtain the inscription for the monument, and the winner was Brian Fitzpatrick of Sydney. The inscription says:

Earth's self upholds this monument
To conquerors who won her when
Wooing was dangerous, and now
Are gathered unto her again.

An annual Dog on the Tuckerbox festival has been celebrated each year since 1992, the 60th anniversary of the monument.

Email ThisBlogThis!Share to TwitterShare to FacebookShare to Pinterest
Labels: legends

The collapse of the St. Francis Dam is the second greatest disaster in California history and considered by some as the worst American civil engineering disaster of the 20th century.

The St. Francis Dam, which was located about 40 miles northwest of Los Angeles, was built between 1924 and 1926. The design and construction was carried out by the Bureau of Waterworks & Supply under the supervision of the organization's chief engineer William Mulholland.

Just before midnight on March 12, 1928 (the dam wasn't even two years old), the dam burst - sending over 12 billion gallons of water over 10 stories high racing through towns before reaching the ocean 54 miles away.

I was able to find information on three dogs who helped family members during the disaster.

According to Carolyn Chivvis Van Laar, who was 7 years old at the time of the disaster, their dog Don woke the family before the floodwaters descended, saving their lives. Don was given a gold medal from the Pasadena Post in 1930.

Lillian Curtis, who lived near the power plant below the dam site, woke to the sound of the floodwaters (which she thought was a tornado), warned her husband and two daughters, grabbed her young son and ran to a nearby hillside with the family dog at her side. There, she dug a hole, placed her son in it and put the dog on top to keep him warm. Lillian, her son and one other man were the only ones in that community to survive. Dianne Erskine-Hellrigel, executive director of the Community Hiking Club of Santa Clarita, said "I can still see that hole that she put her son in, though it has been 90 years."

According to a family member, her mother-in-law's family was killed in the disaster - her mother and brother died from the floodwaters, and her father died within a month after having contracted pneumonia. Her mother-in-law, Peggy, was 12 years old at the time. "Peggy found herself being washed downstream in a torrent of mud and debris. She grabbed a cedar chest that was afloat, and held on for dear life. She heard a dog barking in the darkness and attempted to steer herself toward the sound. It was her family dog Roscoe, a Labrador Retriever. Together they managed to find high ground."

At least 450 people lost their lives. The failure of the dam was attributed to human error and poor engineering judgment. Mulholland took full responsibility for the accident and stepped down as head of the City of Los Angeles Bureau of Waterworks & Supply.

Email ThisBlogThis!Share to TwitterShare to FacebookShare to Pinterest
Labels: disasters
Older Posts Home
Subscribe to: Posts (Atom)
If there are no dogs in Heaven, then when I die I want to go where they went. -Will Rogers 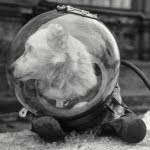 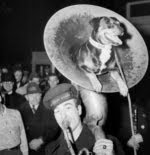 USCG mascot who liked to have fun

first dog to cross the US by car 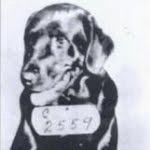 waited 14 years for his master's return